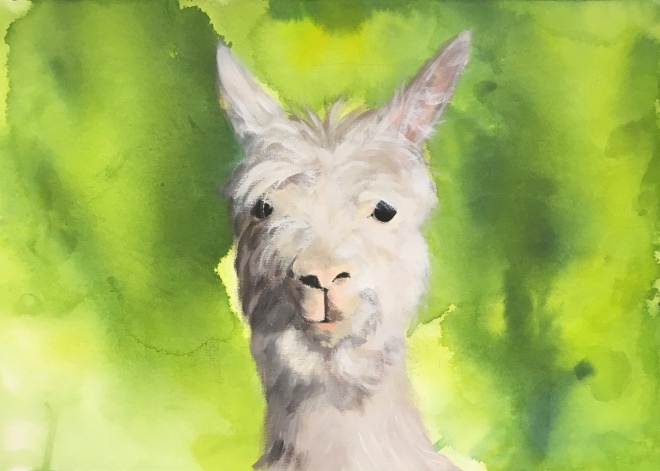 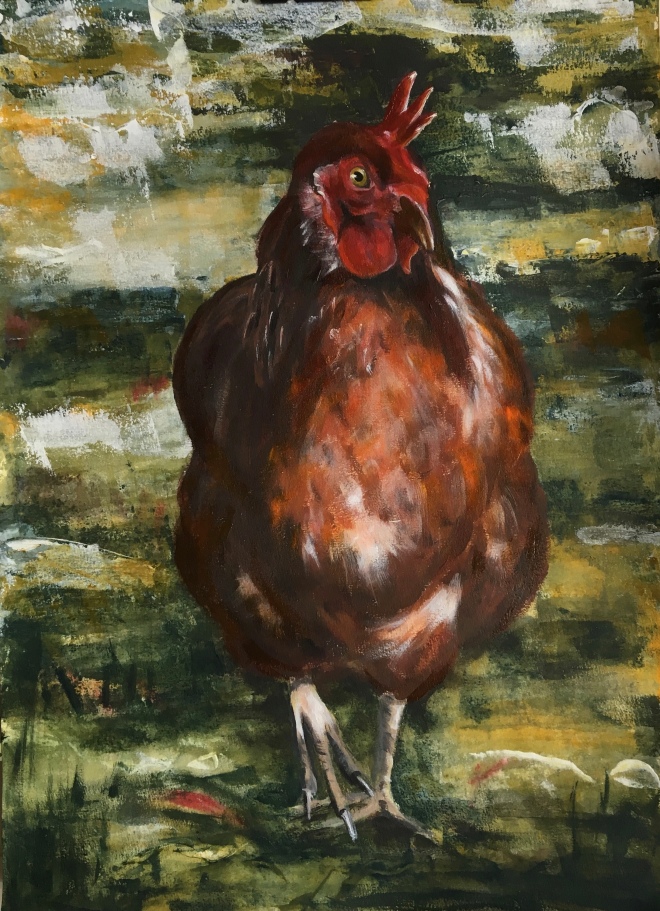 As this year draws to a close, I thought I’d share a couple of my favourite paintings. The chicken was completed just a few days ago. Both these animals (and their animal buddies) live with a friend of mine. They have the best life. 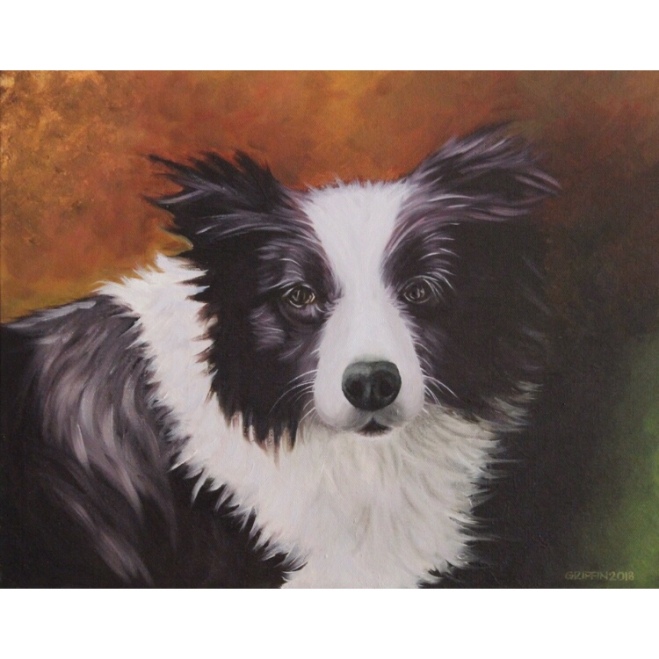 This is Grace – a beloved dog who lived with her family for fourteen years.

This painting of her is my absolute best painting yet – and I’m proud of it but a little nervous too.

That internal critic sneaks in with “hmm – well this is good – but can you do it again …? What if this is it…?” If only that voice could be silenced.

The only option is to keep working, keep trusting myself. And finding gorgeous creatures like Grace to motivate me and make me fall in love with the process of bringing their image into being on canvas. 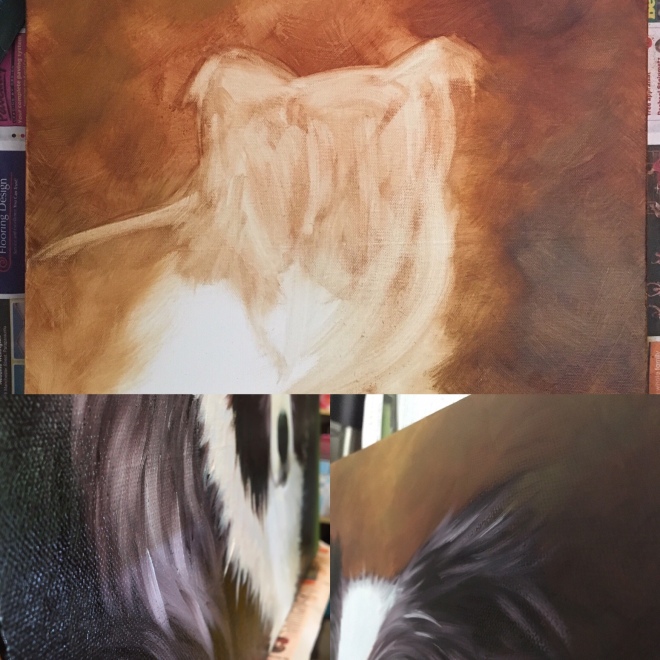 A work in progress – nearly finished.

A few thoughts on painting …

I’m finding that I’m becoming more able to look at a rough shape in the early stage and “see” the thing I’m wanting to paint.

I’m working from a photo – I can see that, all the details, but I have to be able to see it in a different way – it’s as if I have to take the image inside and then project it back out onto the canvas.

And in that process things change a little – colours, composition.

It becomes real in my mind’s eye first – and then I need to create that on the canvas. That’s the challenge, the frustration – finding how to bring that inner vision into reality.

And another discovery – when I’m painting for someone else (as with this) it doesn’t feel right to share until they’ve seen it first. So I’m only comfortable sharing very early stages or oblique views – it’s as if – once I’ve started – it doesn’t really belong to me.

Its time I posted these thoughts.

I started writing this in June – and for some reason wasn’t sure about sharing. But its time now…

In the last few weeks of last year I went to a short series of art classes, deliberately choosing the option that would challenge me the most, drawing and painting.

This is something I’ve always wanted to do, but never felt capable. Part of the problem is that I’d never learnt how. I’ve had a shocking tendency to think that if I can’t just naturally know how to do something straight away, then I’ll dismiss it by saying its not for me. (I know that this must be some form of self protection – but let’s not go there now…). And even when I have discovered something I’m good at, I haven’t kept working at it. Persevering hasn’t been a strength. Writing is probably the only thing I’ve really stuck at.

So – these art classes, about seven sessions – following the guidance of the tutor, his techniques, his encouragement, and sometimes, his direct acts of correction and teaching – it was a revelation.

I discovered I could draw – from a photo at least. I’m still working up to drawing from life.

So – the first session began with the instruction to try to draw the person sitting opposite. This is what I thought was a reasonable effort: 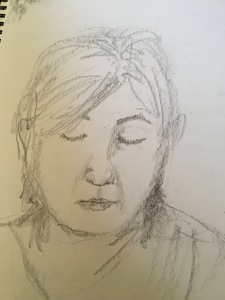 What was I thinking?

Then later that session, following the guidance of the tutor, and working from a photograph, I managed this: 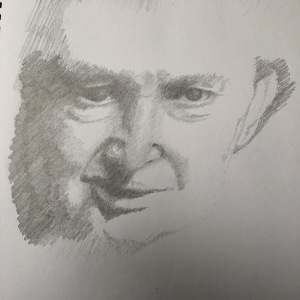 And then the following weekend I did this drawing at home: (from a photo of Virginia Woolf’s mother, Julia Stephen). 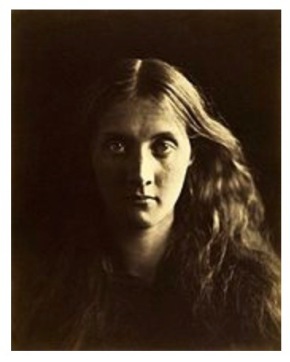 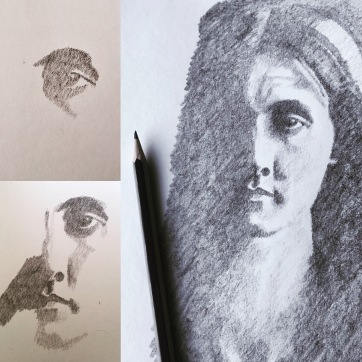 During the next few sessions we explored different media and techniques, mixing colours, and I discovered the joy of painting with oil.

My elderly cat Frida died towards the end of the sessions. A week or so later, I went to the next class, and tried to engage with a couple of the photos provided as prompts for painting, but it felt as if it was forced, almost as if there was a rhythm I could sense but not connect with. So I restarted using my own photo of my girl – and if there is a “flow” then I fell deeply into it. 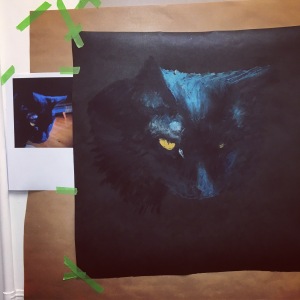 I didn’t quite realise what I was doing until I heard a couple of “ooh”s and “aah”s from behind me. I stepped away and walked across the room – turning back – it was as if Frida was shining through the darkness. “Ghostly” was a word one or two others used.

I remember feeling quite spooked, quite stunned that I’d come close to her likeness, and that it had such an eerie quality. I was happy – but also in quite a strange state of mind – floating. To be honest, not really in a very focused state to start the 40 minute drive home. A near miss at a round-about shocked me into paying attention, and made me realise what a strange state I was in.

Can animals come through to us?

Can we channel their energy?

Was the thin veil still open, so I was in tune with her essence?

Did she come through to me, gifting me with an ability to see and create that I longed for but hadn’t known til now?

That’s how it felt. As if she had been present – and it wasn’t a “cat” presence. It was an energy, a pressure, a transference. As if there was more to her than I had realised when she was in cat form. And I haven’t stopped, I’ve kept working.

We got another cat. A sweet, nervy, anxious creature. I painted him that summer. 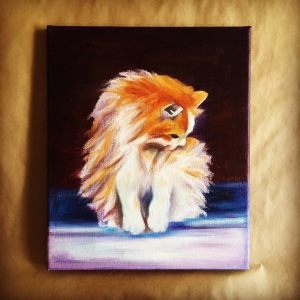 This year, I started a painting of my friend’s dog. I wasn’t happy with the background, so I started another. 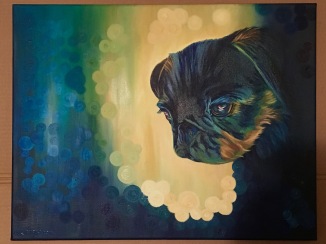 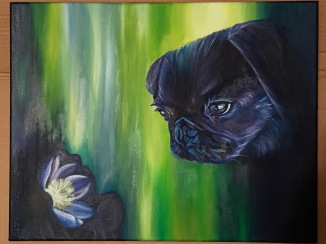 Just a few weeks ago I gave them both to her. And it felt good to release them into the world.

So – this is why there hasn’t been so much writing on here lately. This new passion has taken hold. And it feels like something I will persevere with. I know I’ll have days when I’ll feel as if its all rubbish and I should give up. But I’ve seen enough to know that this is something I can do – and I love it.

My goal – to keep learning – and to find a way to combine words and images – perhaps to have text as part of a painting.

Its going to keep me busy for a long time… 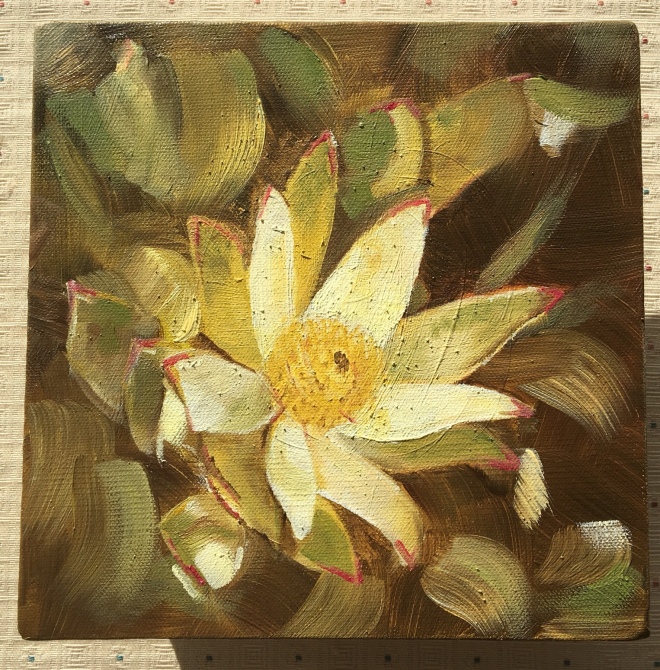 So this is why I’m not getting much writing done at the moment. My attention has shifted towards the visual and I’m working on painterly things. Learning materials and techniques and experimenting.

I remember someone telling me years ago that the first thing you create should be given away. I released this little beauty into the world last night. A golden gift for a golden anniversary. 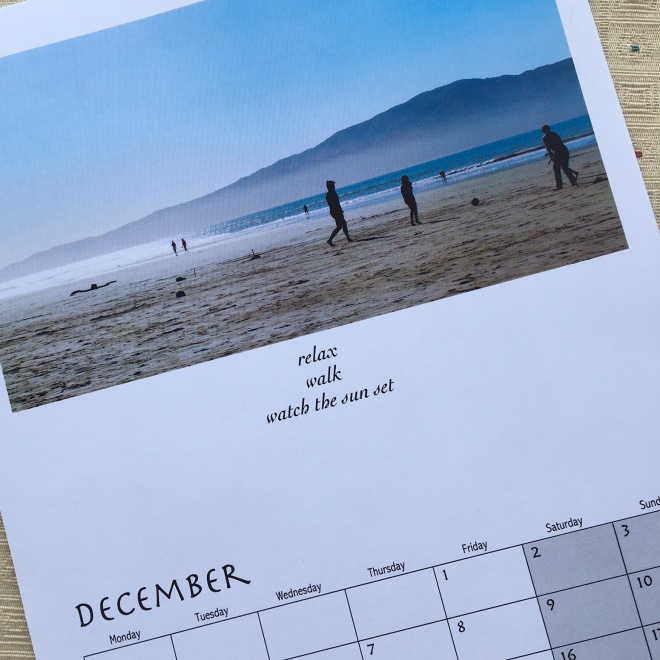 What I’m proudest of this year is that I’ve made time, taken time, for personal interests throughout the year – specially the latter half of this year. I’ve started drawing and learning to paint. I’ve noticed that as I shift into this visual world my writing has gracefully taken a back seat – but I’m sure it’s going to surface again soon.

What I’d love for next year is to find a way to combine paintings and text into artworks that balance both sides of my soul.

So far I’ve chosen a singer/songwriter, and a poet, and I wanted to round out the set with a visual artist, and another male. (I’m thinking of exploring this challenge again, drawing from female sources of inspiration.)

“I had only to open my bedroom window, and blue air, love, and flowers entered with her”.

And I wondered – who is “her”? His muse, his imagination, inspiration? His wife died in 1944 – perhaps he refers to his memory of her, her spirit?

I loved the imagery of his words – how they formed a poem in their own right, and how they seemed as much a work of art as his paintings.

I had only to open
my bedroom window
and blue air,
love,
and flowers
entered with her.

I can’t remember when I first discovered the work of Chagall. I don’t know how old I was, or what I was doing at the time, or how I first saw his work – book, postcard, gallery? … no idea. But I do remember being equally enraptured by the dream-like quality of his work, and then confronted by his used of colour. There are only a few pieces of his work that I could probably live with on a daily basis – but then – that’s not the point of art. The fact that I find much of his work unsettling and confronting is what draws me back to it.

And then to look for quotes by this artist, whose work I’ve found so powerful, was another discovery. I love the way he talked about colour and its importance to him.

When searching for the source of this quote, the following link was suggested by the mysteries of Google:

The Christies sale catalogue situates the quote with a brush and ink a from 1954, “Grande nu à la fenêtre”, showing a naked woman standing in front of a window, and in front of a man sketched into the background. However, I felt a closer connection to another work pictured in the catalogue, “L’inspiration de l’artiste” (circa 1980). For me, although there is no window evident, this work contains both literal references to the quote – someone flying into his space, flowers and the blue air/sky, and the sense of movement, energy and anticipation in his words. And love – well – the more I read, for Chagall, love was in everything he did. 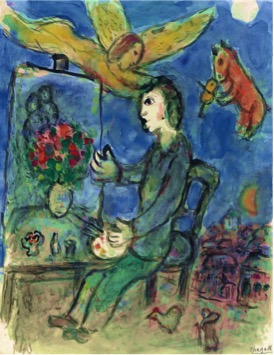 Today, the sky was a clear vivid blue, the colour so bright it was almost tangible. The air was crisp and cold at the start of winter, here in the southern hemisphere. If I could paint, perhaps I would try to capture the icy chill, maybe using the cleanest, clearest white I could find.

If I were Chagall, perhaps I would use a colour that represented the feeling of cold – maybe a bright orange, or magenta – to show how fingers, toes and nose, once exposed to the cold, actually start to feel as though they are burning.

i
six thousand photographs
taste of time and love,
pain and determination
who would have thought
these black and white
relics could taste so rich?

ii
these small portraits
are bitter-sweet
and speak of a time
when you used colour
to flavour your life
paint became the spice,
the chilli, the salt, the honey
the canvas became the table
on which your life was served

leave the fire dogs sleeping
live life in the raw

iv
there is passion
in the ripe fruit,
the soft flesh
the spiky skin
describe the body
you live within

vi
heat the tortilla until it curls
wrap yourself inside it
like a funeral shroud
Xochiquetzal the goddess of painters
is your guide
as you walk through marigolds
Mizcoatl, Tozpan and Iiutl
the fire dogs stand guard
Huehuetéotl the old god
lights a new fire
ensuring your purification,
your transformation,
your regeneration

vii
it was never your intention
to live within convention

I saw an exhibition a few days ago – “Frida Kahlo: Her Photos”, just a day or two after reading the next challenge was “flavour”.
I sat in the exhibition and wrote the first six lines. After that, I remembered the paintings of fruit and other foods, and the connection to flavour was made. Searching for information on Mexican food, I found references to the old gods of Mexico – I hope they don’t mind the way I’ve included them here.
So I’ve taken some liberties with this challenge – reinterpreting the intent of “found poetry” by finding text and inspiration in the exhibition, in her paintings, and in websites describing the food of Mexico, and I used all these to inform the poem.