who would I be

if I could split my skin 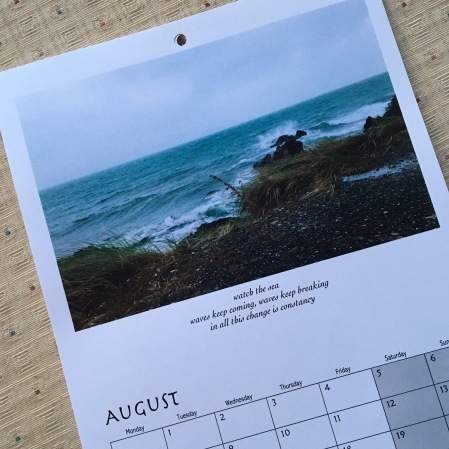 watch the sea
waves keep coming, waves keep breaking
in all this change is constancy

I’ve been reminded of change lately – the passing of seasons, the rhythms of life. The fact that nothing lasts forever, but our memories hold our dear ones close.

Going out in the garden today it was heartening to see fresh green growth, and new flowers, even though we’re still in the midst of winter.

And my old cat is seeking warmth, a blanket, a knee, and today, a sunny corner of the couch. She is sleeping her days away – I hope her dreams are sweet.

What does it mean when you meet someone in a dream, you learn their name, their job, develop friendship. They are interested in who you are, they look at your writing.

They asked me a question I can’t remember fully – but I know it was a challenge of sorts – “so if you have this Scottish heritage why are you still writing …?” I can’t remember the rest of their question, but I know I countered with “…and the Irish”. We were looking at handwritten text and in the dream I could read it – but have no idea now what was written.

We sit looking at the dark sky filled with multiple crescent moons and stars and I say, “on nights like this I can’t imagine there being anywhere better – but maybe its time to leave…” and we agree to move away.

I hear you child – I hold your heart in mine

I am giving you time

permanence is illusion – all things shift and return to source

chaos is the foundation – live in the change and shape it

With reference to the poem “the visitor”:

Myth:
In Māori mythology the fantail was responsible for the presence of death in the world. Maui, thinking he could eradicate death by successfully passing through the goddess of death, Hine-nui-te-po, tried to enter the goddess’s sleeping body through the pathway of birth. The fantail, warned by Maui to be quiet, began laughing and woke Hine-nui-te-po, who was so angry that she promptly killed Maui.

Tradition:
In some traditions, the fantail is regarded as “a harbinger of death when seen inside in a house”.
(Kelly Keane. ‘Ngā manu – birds – Birds associated with death’,
Te Ara – the Encyclopedia of New Zealand, updated 8-Sep-15)

Interpretation:
I remember that my own interpretation at the time I experienced this feathered visitor, was less that the presence of this little bird foretold a literal death, but more that it came as a confirmation of the end of a relationship and the changes that were to come. Still, it was a death of sorts.

When emotions were raw, when change was inevitable, this visitor from the natural world somehow seemed to be an acknowledgement, and a reassurance.

Visitors from the wild-world:
This little bird was not the only animal visitor I had during this time – the other was a possum.

I was living in a semi-rural area, near bush, but I had never in five years seen or heard a possum near the house. And then, one night, returning to what was still my home for the time-being, after spending time with friends who had offered me a room in their flat, I parked the car and walking to the gate, there on the lamp-post at eye level was a possum. It was looking straight at me. I was surprised, but I remember greeting it, asking “What are you doing here?” Of course, there was no answer beyond its silent presence. And I felt that was its purpose – to simply be there with me in that moment.

Days passed and I moved out to live in a flat in the centre of town. I carried on with life, putting on a brave face, and clinging to my misplaced hope that this might be temporary, that there might be a return to the way things were.

One night not that long after, coming home from a night out with friends, I parked the car and there on the lamp-post at eye level was a possum. Again surprised, again confronted. Here in the middle of the city I was face to face with a wild creature. (I even caught myself wondering if it could be the same one). And just as with the fantail, it felt as though my decision was being affirmed, that I had made the right decision, no matter how painful it was.

Each time, I was alone. Each time, I was reminded of my aloneness, but it felt as if I was being reminded that I had the strength to cope. There were so many days and nights when I felt as though my world was collapsing, had in fact collapsed. I felt alone, adrift, abandoned and the pain was palpable. Hearts do break, and there is no relief.

One of the few things that gave me strength was knowing that the wild world had crossed the threshold, had stepped in to my time and space to be present with me. Quite possibly it stopped me going completely off the rails over the following months.

Regret is such a difficult thing.

Its been nearly two years since I was rocked by the death of a dear friend, a significant person in my life. It would be their birthday tomorrow.

We hadn’t been in touch for a number of years, but I’d always felt the sense of connection, and even more, the growing need to thank them for the time they’d spent with me. The discovery they were gone was made at exactly the same time I committed to contacting them again. I’d been writing to them at the time. I had missed them by just a month or two.

The shock was intense. I spiraled into a strange emotional place, struggling to process the memories and emotions that suddenly surfaced. I could not believe how raw my emotions felt, and how conflicted.

Grief is bad enough, but my feelings were magnified by regret. Regret that over the years I’d had opportunities to make contact and not taken them, had reason and not acted upon it, had been held back by misplaced pride, or fear of rejection.

Talking this through with two trusted friends helped me to gain some perspective, and I wrote, and wrote, discovering imagery and metaphor that helped me to gain insight into my feelings and into the events of the past.

Coping with all this was difficult. I had no option but to sit with this regret, I couldn’t deny its presence, I couldn’t make it go away. I had to simply sit with it, side by side, and then gradually take it inside me, to accept it as mine.

But regret was in no hurry, it sat heavily for at least a year. The difficulty lay in adjusting to the reality that there was no way to reconnect, no way to tell someone how I felt. They were gone and nothing would change that. It took a long time to accept that reality, to stop beating myself up for not acting sooner. But gradually the pain eased, writing helped.

I think there are some things that just take our brains a long time to adjust to. Memories that no longer fit with the present. Desires that have no way to be fulfilled. Neural pathways need to be reviewed, and rewired. It’s a process that happens slowly and I have been changed by it.

I learnt that regret can teach us about acceptance – accepting that I made the best decisions I could at the time – and though I may regret those decisions now, I can’t change them. My only choice was to accept – staying with the pain of regret would be unbearable, There would be no future in staying in that place. So I guess acceptance is also about surrender. Surrendering to the truth that there are some things that can’t be changed, and looking for the most positive path forward.

This process did help me to engage more fully with the things that mean the most to me. I finally had a concrete example of why we shouldn’t put things off – there may not be a future time in which to do them. Hence, my renewed commitment to writing which has led to my being present in this alternate universe.